Costa Martiánez The legacy of Manrique

Costa Martiánez:
The legacy of Manrique

If you visit Puerto de la Cruz you cannot, under any circumstances, miss one of its emblems, the Martiánez Lake. It is a part of a complex, Costa Martiánez, which covers 65,000 square metres and is one of the most admired examples of how a coastline can be transformed and a world reference in terms of aesthetic integration for leisure. It is the greatest legacy left in Tenerife by one of the most universal Canary Island artists, César Manrique.

Prepare your bag to spend the day bathing and enjoying the sun, but also to soak up contemporary art. The Lake, as we call it, is a swimming pool, a garden and also an open-air museum. In this mini-guide we give you some tips to make the most of the experience. 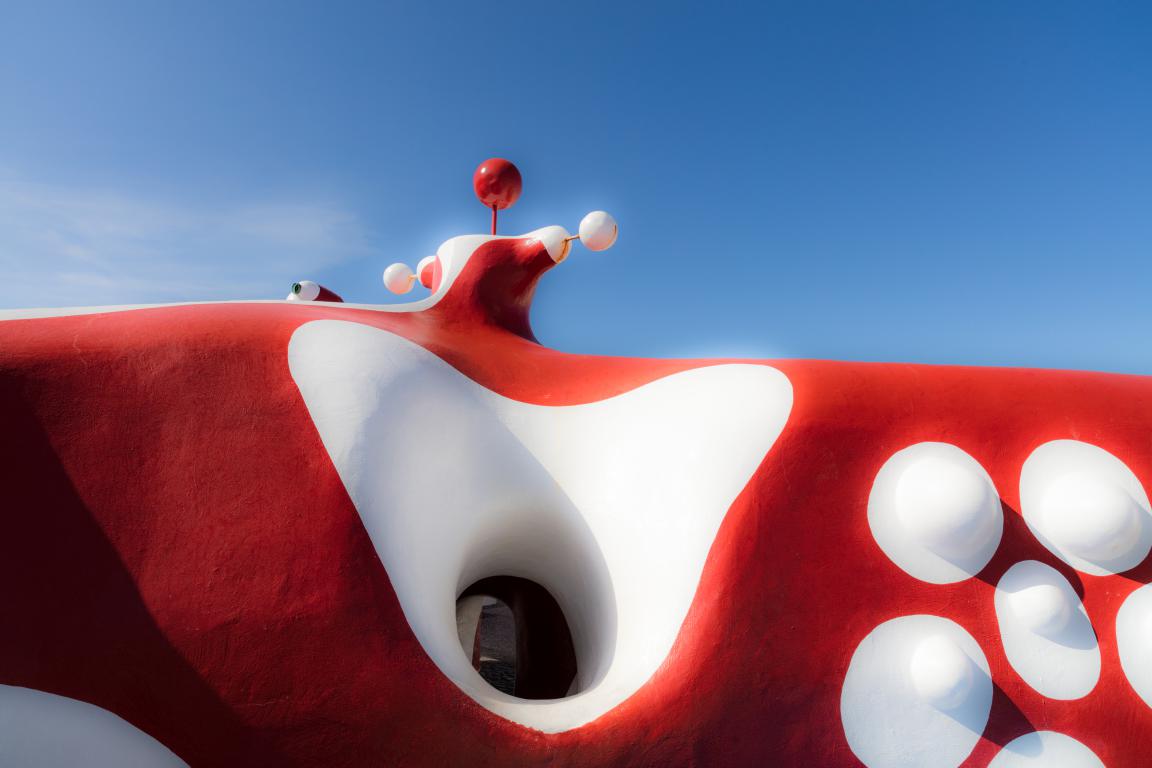 The Costa Martiánez Complex, an open-air museum, was created by the artist Cesar Manrique, making use of most of the most significant elements of the environment which he was going to alter. It is a place full of elements and details that communicate harmoniously with nature through an aesthetic and artistic line that blends in with the environment.

In this way he fixes his attention on natural elements such as endemic vegetation, volcanic and basaltic stone, the sea… and other ingredients representing popular Canary Island architecture, in this case, the San Telmo chapel, of which the Complex tries to be an extension of similar characteristics, wooden palisades, sentry boxes, rounded, whitewashed walls or floors forming patterns with pebbles.

It also adds other characteristic elements of our island constructions, such as pergolas overflowing with vines, tile roofs, wooden doors and windows that are interspersed with garden areas and ponds, waterfalls and water flowing from different channels.

Special attention is paid to the architectural and aesthetic details, to the sounds produced by the falling water or to the zenithal illumination through windows, skylights and open spaces or that coming from indirect lights. Special attention is also paid to the vegetation, which, strategically placed and combined with the effects of natural light and its reflection on the water, create infinite games of light and shade.

You can access the complex from Avenida de Colón, the same walkway that takes you to the San Telmo chapel (another must see) and which is also part of the complex. Get your ticket at one of the four sentry boxes that flank the access to the pools, and which are inspired by the one that watches over the entrance to the chapel.

César Manrique was an artist from Lanzarote who was awarded the World Prize for Ecology and Tourism and the Gold Medal for Fine Arts, among many other recognitions. He took over the artistic direction of the project in 1967 and left his mark on every corner, contributing elements of traditional Canary Island architecture and endemic flora. A curious fact: He designed it on a paper napkin, in a pizzeria. This is how he came up with the idea of a large emerald-coloured bubble of seawater that could provide bathing services for residents and visitors. Manrique was both a genius and a visionary.

The first swimming pools were opened in 1971, on what had been the beach and rock pools of the Llanos de Martiánez, a bathing place used by the first tourists in the late nineteenth and early twentieth centuries. The complex was finished in 1977 and was declared a Site of Cultural Interest with the category of Historical Garden in 2005.

There are basically three zones:

The first and oldest is San Telmo. One can see that the pools were built by a different technical team than the rest in that their lines are angular and there is almost no vegetation. Here, functionality prevails over aesthetics.

However, in the last refurbishment carried out during the years 2004 to 2006, this area was adapted to César’s project thanks to the intervention of the same company that built the original.

The third is El Lago, the largest, covering 33,000 m2, of which 15,000 correspond to solariums, another 15,000 to the swimming pool and the rest to the five islands. The pool is circular and contains 27,000 cubic metres of seawater. Part of the central island’s structure is below sea level (above there are gardens and a restaurant and underneath there is a festival hall).

As if this were not enough, you should know that several sculptures by Manrique are scattered throughout the enclosure. We encourage you to locate each one of them.

Other elements that reinforce the connection with nature itself and are part of the symbolism and visual identity of the Complex include:

Water Crater through which the lake is filled with sea water and made of volcanic rock.

The Geyser – a column of water that rises about 20 meters.

The Costa Martiánez Complex synthesizes one of the creator’s most important hypothesis, that “Nature is the best artist”.

In addition, we encourage you to discover other of the Lake’s little treasures:
The bust in homage to César Manrique, the Bar La Isla, in the form of a naval allegory, the Jacuzzi and the two waterfalls (they say that the artist spent more than an hour meticulously placing the stones until he achieved the perfect sound).

As you can see, the Martiánez Lake, with its more than forty years of history, is still a haven of beauty and peace, ideal for disconnecting from the rhythm of the city. However, it is also a space which is buzzing with activity, hosting concerts, parties and all kinds of events throughout the year.

Find out about possible things happening during your stay and also enjoy the night in this unique environment!

/%postname%/
#
Sort Gallery
on
no
off
on
Email
off
off
en

Any cookies that may not be particularly necessary for the website to function and is used specifically to collect user personal data via analytics, ads, other embedded contents are termed as non-necessary cookies. It is mandatory to procure user consent prior to running these cookies on your website.